Iraq’s embattled Prime Minister Nouri al-Maliki says he will file a legal complaint against the new president, Fouad Massoum, for committing “clear constitutional violation.” Al-Maliki, whose Shiite-dominated bloc won the most seats in April elections, accused Massoum of neglecting to name a prime minister from the country’s largest parliamentary faction by Sunday’s deadline. He said the president has violated the constitution “for the sake of political goals.” Al-Maliki (pic above) is seeking a third-term as prime minister, but the Islamic State crisis has prompted even his closest allies to call for his resignation. A parliament session scheduled for Monday to discuss the election and who might lead the next Iraqi government has been postponed until Aug. 19.

This attitude represents a coup on the constitution and the political process in a country that is governed by a democratic and federal system.

Al-Maliki, speaking on Iraqi TV for the first time since U.S. forces launched airstrikes and humanitarian airdrops in Iraq last week, said the security situation will only worsen as a result of Massoum’s actions. The political infighting could hamper efforts to stem advances by Sunni militants who have seized a large swath of northern and western Iraq in recent weeks. Critics say Al-Maliki, a Shiite, contributed to the crisis by monopolizing power and pursuing a sectarian agenda that alienated the country’s Sunni and Kurdish minorities. After al-Maliki’s speech, Brett McGurk, a United States deputy assistant secretary of state for Iraq and Iran, expressed support for Massoum.

Fully support President of Iraq Fuad Masum as guarantor of the Constitution and a PM nominee who can build a national consensus.

Brett McGurk, U.S. deputy assistant secretary of state for Iraq and Iran, in a tweet 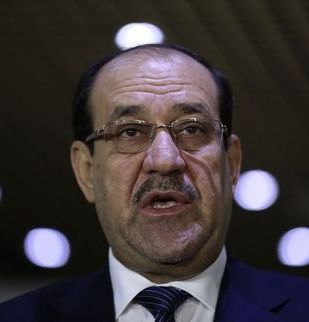