Prime Minister Benjamin Netanyahu said on Sunday that Israel would stay away from Egyptian-mediated truce talks with Hamas as long as Palestinian rocket and mortar attacks from the Gaza Strip continued. The Israeli delegation left Cairo after a 72-hour truce ended in bloodshed on Friday. Palestinian negotiators have threatened to quit Egyptian-brokered Gaza war truce talks Sunday unless Israeli negotiators return to Cairo.

Israel will not negotiate under fire. At no stage did we declare [Israel’s military offensive] was over.

Hamas has refused to extend a temporary truce that helped launch the Cairo talks last week, saying it wants guarantees from Israel first that Gaza’s borders will open. Israel and Egypt have enforced the blockade, to varying degrees, since Hamas seized Gaza in 2007. Israel has said it will not open Gaza’s borders unless militant groups, including Hamas, disarm. Hamas has said handing over its weapons arsenal, which is believed to include several thousand remaining rockets, is inconceivable.

We are not going to agree to a ceasefire without having all of our demands met. This is what our people want.

Hamas spokesman Fawzi Barhoem, in a statement to Al Jazeera 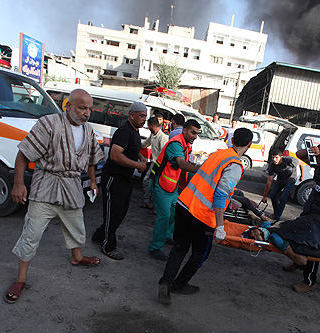