Israeli forces demolished the home of a Palestinian who carried out a deadly attack last month, just hours after Prime Minister Benjamin Netanyahu promised strict measures to deal with rising violence. The move signals the resumption of a policy of house demolitions which has caused controversy in the past. Abdel Rahman al Shaludi’s home in the Silwan neighbourhood of East Jerusalem was torn down after he killed two people by driving his car into a crowd standing on a light rail platform in Jerusalem. He killed a three-month-old baby girl and a 22-year-old woman as he rammed his car into the train stop before police shot him dead.

This pushes the people to more violence, more strikes — because if you are strong, I will be more strong than you. You push the people to do more than that.

A total of 11 people have died in recent weeks in attacks by Palestinians, most of them in Jerusalem, but also in Tel Aviv and the West Bank. The victims include four Jewish worshippers and an Israeli policeman, who were killed when two Palestinian cousins armed with meat cleavers, knives and a handgun stormed a synagogue in Jerusalem on Tuesday. The pair were shot dead by police afterwards. British-born rabbi Avraham Goldberg was among the victims. Responding to the attack, Mr Netanyahu said he had ordered security forces to hit back hard at Palestinians involved in violence against Israelis.

You don’t punish the man, you punish all the family. You punish 55 children here from this — did you think he will forget what you do to him? 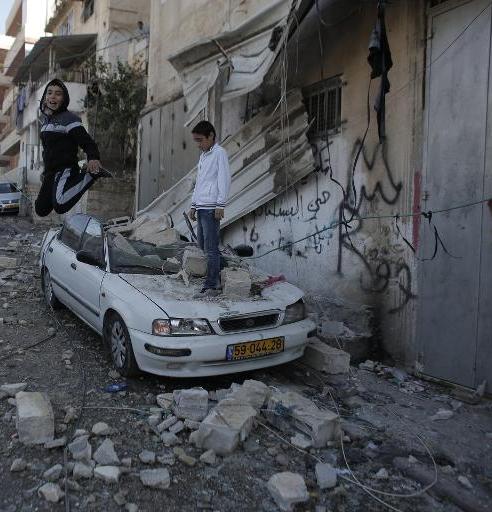