Police in Germany say a military-chartered jet has crashed after colliding with a fighter plane. Bianca Scheer, a spokeswoman for police in the Sauerland region east of Cologne said the Learjet with two people on board collided with a German Eurofighter aircraft on Monday afternoon near the town of Elpe. The fates and identities of the two people on board the Learjet were not certain. Scheer said the plane had been chartered by the German military, but was unable to immediately provide further details.

The German military jet and a second Eurofighter taking part in the exercise were able to land afterwards at an air base near Cologne. 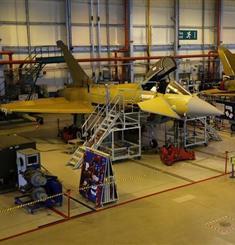