An Italian journalist was among five people killed when an unexploded missile detonated in northern Gaza. The blast, in Beit Lahiya, happened as bomb squad officers attempted to dismantle the device on Wednesday. Simone Camilli, 35, was killed along with a colleague and another three Palestinians. At least six people were also wounded in the explosion - three of them critically.

Once again, a journalist pays the price for a war that has gone on for too long, and for the second time in a few months we weep for the death of someone who was courageously working as a reporter.

Gaza’s police force said the head of the bomb squad, his deputy and another officer were killed. The deaths came as Egyptian negotiators aim to secure a further ceasefire from both sides to extend a three-day truce which is due to expire at 10pm. No breaches of the ceasefire have been reported, but Israel said its navy had fired warning shots at a boat near Rafah as it approached the Gaza border. 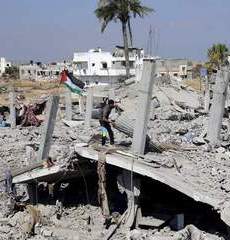