Prince George has taken his first few tentative steps in public - with a little help from mum. The toddler was out with his mother, the Duchess of Cambridge, at the Cirencester Park Polo Club to watch his dad play polo. The young prince - who turns one next month - was quite the handful for Kate, wriggling in his mother’s arms in an attempt to crawl away to explore his surroundings. Hand-in-hand with Kate, he even took a few steps before reverting to crawling. The curious toddler was then quickly scooped back up into his mother’s arms.

The Duchess was very keen, but not for a couple of years yet - when he’s about 7 or 8.

Prince William and Prince Harry who were taking part in the annual Jerudong Trophy polo match. The Duke of Cambridge played at the annual charity match last year, just days before the birth of his son. This year’s event was a family affair with The Queen and the Duke of Edinburgh also watching the action. 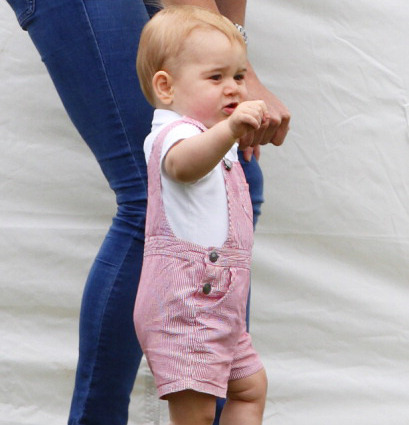