UEFA president Michel Platini will not run against Sepp Blatter for the FIFA presidency. The 59-year-old confirmed to UEFA delegates in Monaco that he’d decided against standing for the FIFA post as he wants to continue his work as head of European football’s ruling body. Platini (pictured) told a news conference he felt passionately he should stay with UEFA. European FIFA executive committee member Michel D’Hooghe welcomed Platini’s decision not to enter a contest against Blatter.

This is the decision I have made. It is about what I want to do with UEFA. Now is not my time, not yet. I want to complete what I have started and I want to go to the end of my contract with UEFA and if the federations wish I will still have a few years before this contract comes to an end.

The former France international Platini was once a loyal supporter of Blatter’s but believes the Swiss has reneged on his public promise not to stand for another term. Blatter, who is 78 and has led FIFA since 1998, pledged to fight for a fifth term after previously promising UEFA he would step aside in 2015. Five of FIFA’s six continental bodies have already announced their support for Blatter, only Europe has publicly opposed him.

I have thought long and hard but I never managed to convince myself that I had to go to FIFA. I chose from the heart and on the basis of my passionate feeling. 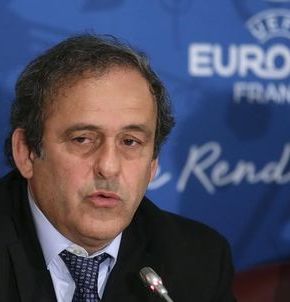