Islamist insurgents have seized the Iraqi city of Tikrit - Saddam Hussein’s hometown - as they surge south towards Baghdad. Iraqi police said insurgents from an al Qaeda splinter group had now taken control of Tikrit - which lies just 150km (95 miles) north of the Iraqi capital. The Islamic State of Iraq and the Levant (ISIL) militants have continued their push south after capturing the second city of Mosul on Tuesday - causing more than 500,000 people to flee the violence.

We can’t beat them. We can’t. They are well trained in street fighting and we’re not. We need a whole army to drive them out of Mosul. They’re like ghosts: they appear, strike and disappear in seconds.

Some 250 guards at Iraq’s largest oil refinery in Baiji were also forced to withdraw to another town after the militants sent a delegation of tribal chiefs to persuade them to pull out. A senior government official said the production of crude oil in Iraq - which produces around 3.5 million barrels of oil per day - could be affected after the attack on Baiji. 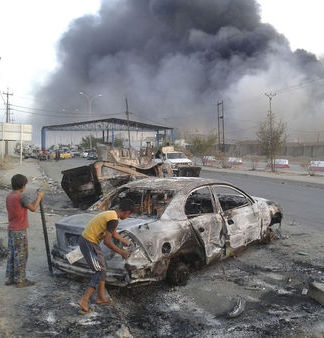