A mammal that looks like a mouse but has some of the characteristics of an elephant has been found scampering around an African desert. Macroskeledies micas is a new species of elephant shrew with a long tail and small furry body but also a long, trunk-like nose. Dr Galen Rathbun, of the California Academy of Sciences, came across the animal while walking through the desert in Namibia.

They’re actually more closely related to elephants than they are to mice. Think about crossing a miniature antelope and an anteater.

The creature eats termites and insects like an anteater, and is unusual in that it is monogamous. The species usually gives birth to twins or triplets, which are covered in fur and ready to run straight away. Details of the research are due to be laid out in the Journal of Mammology. The California Academy of Sciences scientists will return to Namibia in September to study the animal’s habitat and how it survives in such harsh desert conditions.

When we sequenced the DNA and looked at them a little more closely, we said, ‘This thing is really different.’

Dr Jack Dumbacher, curator of ornithology and mammalogy at California Academy of Sciences 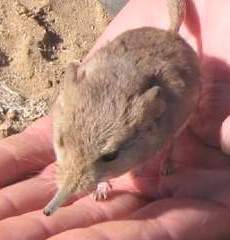