A 54kg Burmese python has been blamed for eating numerous cats in a Florida city. The slithery 3.6 metre-long brute (12ft), captured by police officers in Port St. Lucie on Friday, is believed to be behind the disappearance of a slew of neighbourhood pets over the past nine months. “It’s the answer to so many questions,” said Pamela Dinola, who lost five of her seven cats. Pythons are an exotic species and growing nuisance in the Sunshine State where they have no natural predator and feed on native wildlife, most notably in the Florida Everglades.

It’s more than speculative to say that the python has been (responsible). It’s more probable than not.

Dinola said she suspected raccoons when her first cat disappeared in November. But on Friday she spotted the python wrapped around a neighbour’s feline. Police, who think the python was let loose by a pet owner well before it reached its current size, now consider the mystery behind the pet deaths to be solved. State officials are now looking for the snake’s owner.

I wondered what happened to all the little animals. Some of the neighbours had a couple of snakes that they kept in one of those aquarium things, and they’ve moved. 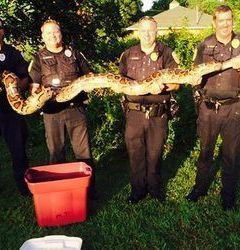