The U.S. space agency’s Opportunity rover has now clocked more miles on Mars than any man-made vehicle to reach another celestial body, NASA said. Since arriving on the Red Planet in 2004, the solar-powered robot has journeyed across 40 kilometers of Martian terrain. That surpasses the previous record, held by the Soviet Union’s Lunokhod 2 rover, which landed on the Moon in 1973.

This is so remarkable considering Opportunity was intended to drive about one kilometre and was never designed for distance. But what is really important is not how many miles the rover has racked up, but how much exploration and discovery we have accomplished over that distance.

The lunar rover’s record was initially set at 37 km, then upped last year to 42 km by a Russian team that analyzed photos of Lunokhod 2 tracks taken by NASA’s Lunar Reconnaissance Orbiter (LRO). But that estimate was revised downward recently, and NASA is confident that Opportunity is indeed now the record holder.

We’re in a second golden age now, and what we’ve tried to do on Mars with Spirit and Opportunity has been very much inspired by the accomplishments of the Lunokhod team on the moon so many years ago. 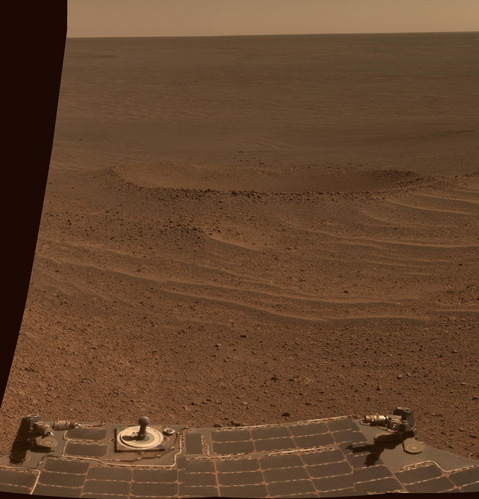