Oh, bother: Winnie the Pooh spanked by Polish council for not wearing pants

Some town councillors in Poland don’t want beloved storybook character Winnie the Pooh as a playground mascot — the so-called “bear of very little brain” apparently doesn’t have enough clothes. The tubby little cubby, based on an actual bear named after Winnipeg, was suggested at a meeting of the council in Tuszyn, a small town in central Poland, to be the face of a new public playground, according to media reports in the United Kingdom. That prompted anger from some councillors, who called Pooh “inappropriate”.

The problem with that bear is it doesn’t have a complete wardrobe. It is half naked, which is wholly inappropriate for children.

Pooh made his debut in a collection of stories by A.A. Milne in 1926. At that time, he was completely in the buff. In 1961, when Walt Disney licensed the rights and made a series of cartoon films about him, Pooh was outfitted with his now familiar red shirt.​ Winnipeg illustrator Nyco Rudolf produced sketches of what Winnie the Pooh would look like with full outfits on. Rudolf said creating gender-based stereotypes about cartoon characters is probably worse for children than a pants-less fictional bear.

Clearly, Winnie is a cartoon bear who doesn’t wear pants, but I’d like to note that the beloved Disney characters Donald Duck and Chip and Dale are also pant-less, Mickey Mouse doesn’t wear a shirt, and Tony the Tiger is nearly nude. 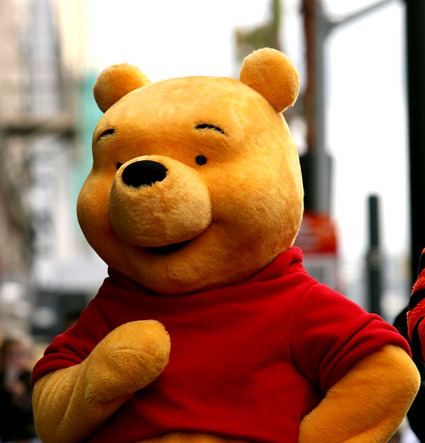