Pakistan has launched a ground offensive against Taliban strongholds near the Afghan border after evacuating nearly half a million people from the tribal region, the army has said. A military statement said on Monday soldiers had found underground tunnels and bomb-making factories in Miranshah, the capital of North Waziristan. It said nearly 15 rebels were killed and three soldiers were wounded in an exchange of fire in the initial ground advance, the statement said. The operation was limited to airstrikes at the first stage.

After the evacuation of all the civil population, a ground operation commenced in and around Miranshah early morning today. A house to house search of Miranshah town is being carried out by infantry troops and special service group.

It began days after rebels attacked the main airport in the southern port city of Karachi, killing 26 people. The 10 assailants were also killed in the roughly five-hour siege that shocked Pakistanis by showing how vulnerable the country’s institutions have become. Pakistani forces killed 376 rebels during the first 15 days of the offensive, the statement said, adding that 17 troops also died. The extent of civilian casualties is unclear. North Waziristan has been completely sealed and there is no way to verify the military’s death tolls.

They are using tanks and armoured vehicles for ground movement. The forces have also taken over the civil hospital in Miranshah and have destroyed four hideouts in the artillery firing. 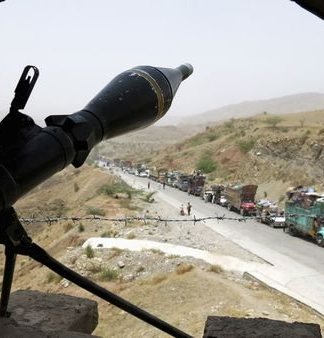