U.S. high court: Some businesses do not have to pay for contraception

The U.S. Supreme justices ruled 5-4 that profit-seeking businesses, such as the Oklahoma City-based retailer Hobby Lobby that sued the government, can hold religious views under federal law. And it means the Obama administration must search for a different way of providing free contraception to women who are covered under objecting companies’ health insurance plans. Contraception is among a range of preventive services that must be provided at no extra charge under the health care law that President Barack Obama signed in 2010 and the Supreme Court upheld two years later.

Our decision should not be understood to hold that an insurance-coverage mandate must necessarily fall if it conflicts with an employer’s religious beliefs.

The court stressed that its ruling applies only to corporations, like the Hobby Lobby chain of arts-and-craft stores, that are under the control of just a few people in which there is no essential difference between the business and its owners. In a dissent she read aloud from the bench, Justice Ruth Bader Ginsburg called the decision “potentially sweeping” because it minimizes the government’s interest in uniform compliance with laws affecting the workplace.

And it discounts the disadvantages religion-based opt outs impose on others, in particular, employees who do not share their employer’s religious beliefs. 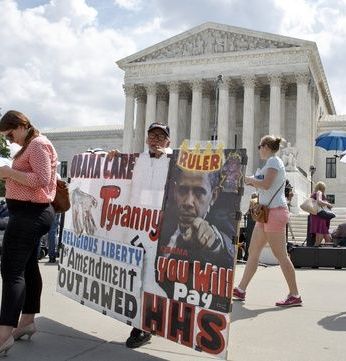