Passenger plane crashes after takeoff in Iran, killing at least 39

A regional passenger plane assembled in Iran crashed Sunday while taking off from the country’s capital, Tehran, killing 39 and injuring another nine on board. Deputy Minister of Transportation Ahmad Majidi provided the latest casualty figures in an appearance on state TV. The channel earlier reported that 48 people had died. The aircraft, an Iran-140 typically used for short domestic flights, crashed shortly after takeoff from Tehran’s Mehrabad airport. The plane went down in a residential area after one of its engines went out, Iran’s state-run IRNA news agency reported.

Initial reports indicate that the 40 people aboard the plane have been killed, including seven children.

State TV said the bodies of some of the victims were so badly burned that they could not be identified. They will be handed over to relatives after DNA tests are carried out to determine their identities, it said. Members of the Revolutionary Guard worked to secure the crash site, and security and rescue personnel combed the wreckage as onlookers gathered shortly after the plane went down. U.S. sanctions prevent Iran from updating its American aircraft and make it difficult to get European spare parts for planes as well. They have come to rely largely on Russian aircraft. 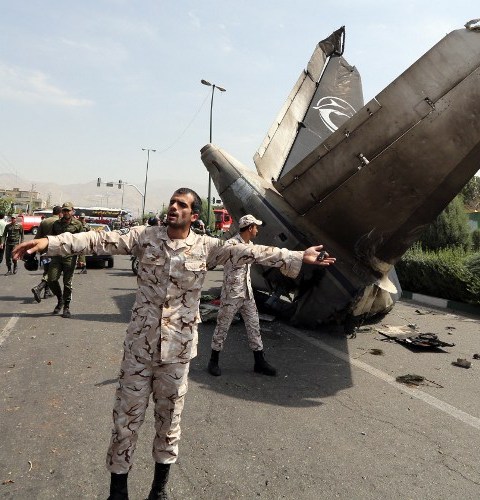