A captain lost control of a passenger plane after his artificial arm became detached as he was coming in for a landing, an accident report has said. The detachment, on a Flybe flight from Birmingham, came as the Dash 8 aircraft was approaching Belfast City Airport in gusty conditions. None of the 47 passengers aboard were injured and the plane was not damaged.

With power still applied and possibly a gust affecting the aircraft, a normal touchdown was followed by a bounce, from which the aircraft landed heavily.

An Air Accidents Investigation Branch (AAIB) report revealed the 46-year-old pilot checked that his prosthetic left arm was securely attached prior to landing. The report said the pilot then disconnected the autopilot and was flying the aircraft manually. Shortly before touchdown on Feb. 12 this year, the man’s “prosthetic limb became detached from the yoke clamp, depriving him of control of the aircraft”. The pilot considered letting his co-pilot take over, but instead decide to move his right hand from the power levers on the yoke to regain control.

We do employ staff with reduced physical abilities. The senior captain referred to in this report is one of Flybe’s most experienced and trusted pilots.

Captain Ian Baston, Flybe’s director of flight operations and safety, said the company was proud to be an equal opportunities employer. 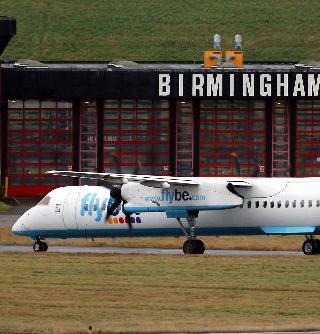