Police have fired stun grenades and tear gas to break up protests in Sao Paolo just hours before the World Cup’s opening game. Officers also used rubber bullets as anger at the money being spent to host the competition spilled over. At least one demonstrator was arrested about six hours before Brazil plays Croatia in the opening match, according to reports.

What I’m seeing more and more is the welcome given to the teams and the happiness of the Brazilian people with our team.

Some 200 protesters reportedly gathered near a Sao Paulo subway station with a red banner reading “If we have no rights, there won’t be a Cup”. They tried to block part of the main highway leading to the stadium that hosts tonight’s match but were dispersed. After a build-up dominated by delays to infrastructure projects, deaths at stadium construction sites and protests over spiralling costs, the football will finally get under way after an opening ceremony this evening. But thousands of fans flying into the country are facing a chaotic welcome after ground staff in Rio voted to stage a 24-hour strike. 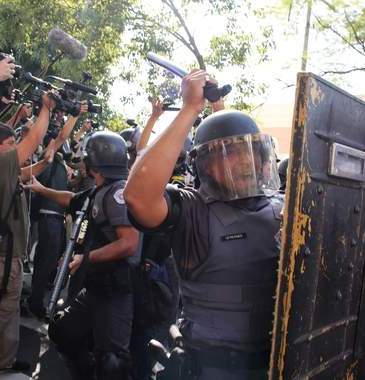