Sheets of cash: Emin’s £2.54m unmade bed goes back on display at Tate

Artist Tracey Emin wiped away tears as she unveiled her £2.54 million unmade bed - complete with discarded condoms - on its return to its “home” at the Tate. “My Bed” became notorious when it was shortlisted for the Turner Prize and displayed at Tate Britain in 1999. More than 15 years later, it is back at the gallery on a long-term loan for at least 10 years. Emin admitted that unlike the chaotic-looking installation, which features empty vodka bottles, cigarette butts, stained sheets and discarded underwear, her bed at home is now a different affair. ”I make my bed every day. It’s so boring, it’s very neat. I’m really OCD (obsessive compulsive disorder),” she said.

It’s a time capsule of a woman living in the 1990s in a really wild way.

Emin said that seeing the work - which is now subject to rigorous security in the form of a sensor and a guard to prevent visitors from getting too close - left her emotional. ”I’m 52 nearly. Even though I was quite old when the bed came into fruition I didn’t look old or behave old,” she said. ”I’m a bit tearful, It means a lot to me. I feel pathetic but there are things on that bed that have no place in my life any more. ”That bed belonged to a young woman and hopefully in 20 or 30 years’ time the bed will be here but I won’t probably.”

That’s what art’s about. It’s about a legacy, about making something which goes on without you. 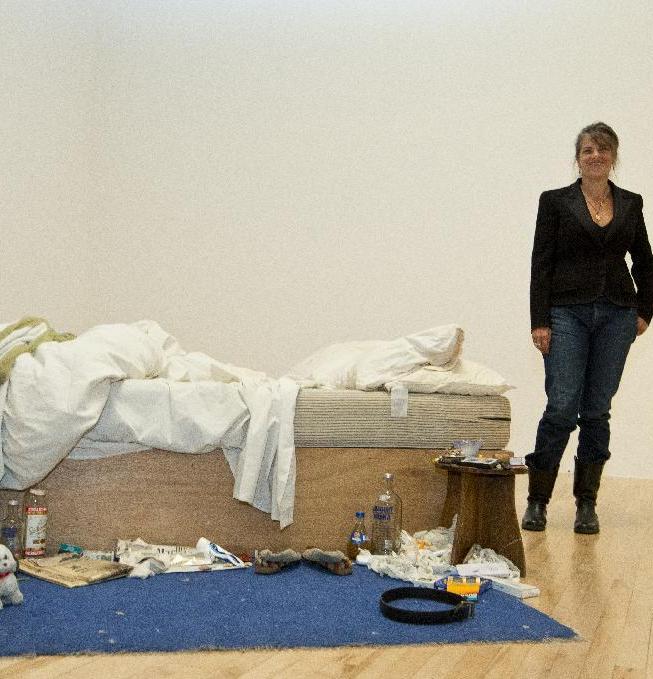