Clashes broke out Friday as tens of thousands of Pakistani protesters from two anti-government movements converged on the capital, presenting the 15-month-old civilian government with its biggest challenge yet. Gunshots hit the vehicle of former cricket star and opposition politician Imran Khan (pictured above) as he led his supporters through the eastern city of Gujranwala. Residents brandishing ruling-party posters attacked his convoy, throwing shoes and stones. Khan was not injured, his spokeswoman said.

We have come to save our country because of the call of our leader, Imran Khan.

Protester Ajaz Khan, speaking before the shots were fired at Khan

Khan and populist cleric Tahir ul-Qadri are slowly leading separate processions towards Islamabad where they plan to occupy main streets until Prime Minister Nawaz Sharif resigns. Security was tight in the capital and authorities had blocked several main roads with shipping containers and barbed wire in a effort to thwart the marches. Riot police were out in force but hundreds of protesters began to gather, banging drums, singing and dancing as they prepared to welcome the their comrades approaching the city. 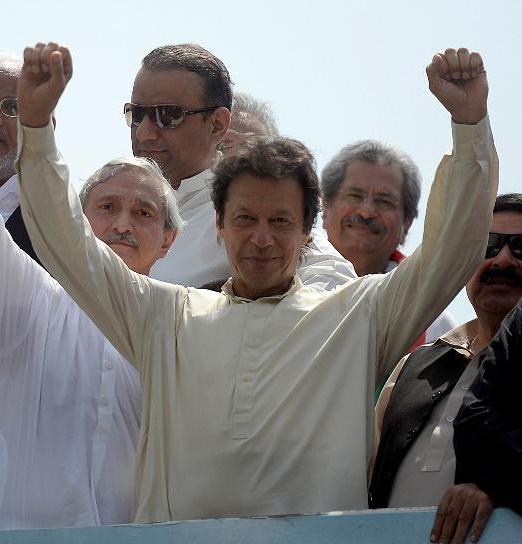