Sir Cliff Richard’s close friend Cilla Black has said she is “absolutely positive” allegations he sexually assaulted a boy are untrue. The singer, who is often spotted at social events with the pop star, said she was shocked to hear that an investigation has been launched into an alleged sexual assault on a boy under the age of 16 in 1985. Richard’s Berkshire penthouse apartment was searched for five hours last Thursday by officers from South Yorkshire and Thames Valley police. The singer, who was at his home in Portugal when the search took place, has firmly denied any wrongdoing. Black and Richard’s friendship dates back to the 1960s, and they are often photographed watching tennis at Wimbledon together. Other high-profile names have defended Richard, including Sir Michael Parkinson who said the media’s handling of the case was like a “witch hunt” and called for greater protection of people’s anonymity until they are charged. Richard is expected to return to the UK on Tuesday and police have said they want to speak to the star soon.

Cliff is a very close friend of mine and has been for a million years … I, like everyone else, was shocked to hear of these allegations and I am absolutely positive that they are without foundation. 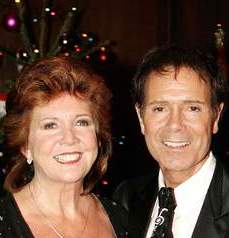