Mahiedine Mekhissi-Benabbad has been stripped of the 3,000 metres steeplechase gold medal after performing a shirtless celebration down the final straight at the European Athletics championships. The Frenchman, well clear of the rest of the field, pulled off his vest as he came around the final bend, put it in his mouth as he waved to the crowd. He then held it in his hand as he sprinted down the final straight for what appeared to be his third successive European gold in the event but turned out to be a premature celebration.

When I took off my vest on the last metres, it was because of my joy, of course. It was the pleasure of winning. I was so happy to defend my title.

He initially received a yellow card from a track official for “acting in an unsporting or improper manner” before he started his lap of honour. But he was later disqualified after Spain, whose athletes finished fourth and fifth, made an official protest citing rules on “clothing, shoes and bibs”, organisers said. Mekhissi-Benabbad’s compatriot Yoann Kowal, who had moved from fourth to second in the final 200 metres, took gold instead, ahead of Krystian Zalewski (Poland) and Spain’s Angel Mullera. 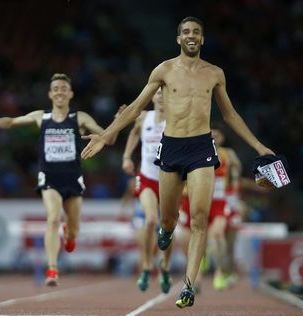