Liverpool have agreed to sell disgraced Uruguay striker Luis Suarez to Barcelona with great reluctance after trying all they could to keep him, manager Brendan Rodgers said today. Suarez, 27, is to sign a five-year deal with the Spanish giants, pending a medical. The transfer fee is a reported $130 million (€95m). Rodgers said Suarez’s $40 million (€29m) move from Ajax Amsterdam to Liverpool in January 2011 had made him a better footballer.

The club have done all they can over a sustained period of time to try to keep Luis at Liverpool. It is with great reluctance and following lengthy discussions we have eventually agreed to his wishes to move to Spain for new experiences and challenges.

Suarez was expelled from the World Cup in Brazil and given a nine-match competitive international ban as well as a four-month suspension from any soccer-related activities for biting Giorgio Chiellini. After initially denying he bit the Italy defender, the Uruguayan later issued a carefully-worded statement admitting his offence, the third time he has bitten an opponent during a match, and vowed there would be no repeat.

I am very proud I have played my part in helping to return Liverpool to the elite of the Premier League and in particular back into the Champions League. Thank you again for some great moments and memories. You’ll Never Walk Alone. 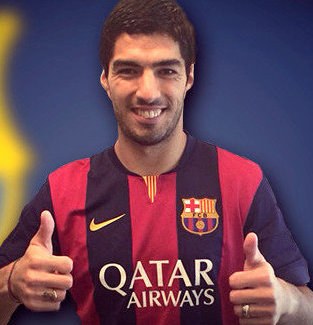