An almost perfect edition of the first comic book featuring Superman has sold for $3.2 million at auction. The vintage work’s seller, Darren Adams, a collector in Washington state, described the 1938 edition of Action Comics No. 1 as possibly the “best copy in existence”—the “Holy Grail” of comic books. The cover features the red-caped man of steel hoisting a car over his head.

It’s a historic moment that not only speaks to the greatness of Action Comics No. 1, but also the overall health of the comic book market.

Harshen Patel, of the Certified Guaranty Company, which grades the quality of rare comics

The character is widely credited with starting the multibillion-dollar worldwide comic book superhero phenomenon. Only 50 to 100 copies of the comic book are believed to still exist, most of them in considerably poorer condition than that owned by Adams. The nearly flawless Action Comics debut was purchased on eBay by marketplace firm ComicConnect, whose director Stephen Fishler has not ruled out putting it back up for sale. It is believed to be the highest price ever paid for a comic book. 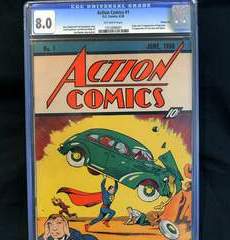