It was the king of the carnivores that ruled the Earth 70 million years ago but maybe the Tyrannosaurus was friendlier than its reputation has allowed. A trio of fossilized footprint tracks discovered near Tumbler Ridge, in northeastern British Columbia, Canada, offer compelling evidence that the beast was not solitary but instead travelled in packs. Aaron Fredlund, a local guide, found the footprints in October 2011: As he made his way across a ledge along the river, he stumbled across two unmistakable footprints etched into the rock.

I was hunting with a client and we were just walking along, and I didn’t want to cross the river again for the millionth time. … These tracks are really distinct. There was no doubt what we found.

Fredlund began to leave, thought better of it, and went back for photos. When he showed his wife the photos, she urged him to report his discovery. Those photos set Richard McCrea’s heart racing half a world away. McCrea, curator of the Peace Region Palaeontology Research Centre in Tumbler Ridge, was in Australia at the time. The picture showed Fredlund’s own foot beside the half-metre dinosaur fossil.

We have extremely compelling evidence that Tyrannosaurus travelled in groups. This was suspected and this is probably the most definitive evidence to come out to date on that topic. 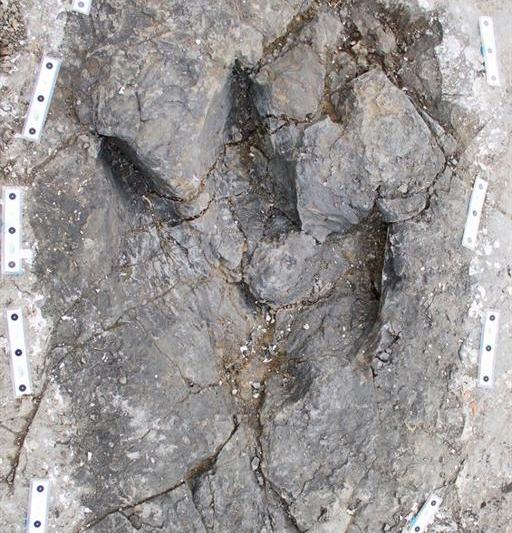