A woman escaped from the fiery wreckage of the TransAsia Airways plane by clambering through a hole in the fuselage - and then phoned her father to come and pick her up. Hung Yu-ting was one of only 10 survivors when the aircraft crashed into houses near a runway on Taiwan’s Penghu islands on Wednesday. Her father Hung Chang-ming helped rescuers put out the fire and dragged more people from the wrecked plane before later being reunited with his 34-year-old daughter. She suffered burns to her arms, leg and back during her escape and is recovering in hospital.

She called me on the phone to say the plane had crashed and exploded but that she had already crawled out and I should come right away to get her.

Forty-eight people were killed when the twin propeller ATR-72, which had taken off from Taipei, crashed while trying to land in stormy conditions and low visibility. The effects of a typhoon had cancelled around 200 flights earlier in the day, but aviation officials insisted conditions in the area were acceptable to fly. Several children were among the dead, which included a family of six and a family of four. 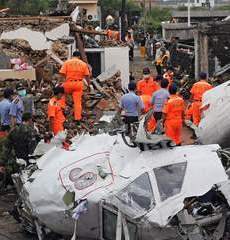