The chant “I believe that we will win” has been incorporated into marketing hype for broadcasts of the United States team’s World Cup campaign, but one person who is not buying into the notion of the U.S. winning the World Cup is head coach Juergen Klinsmann. Recent comments in a magazine article saying his team were not at a level yet to win caused a stir in the U.S., where some viewed the comments as defeatist, even un-American. But he may just be trying to manage expectations, as after facing Ghana, the United States faces Portugal and then Germany, one of the favourites.

For us now talking about winning a World Cup, it is just not realistic. If it is American or not, you can correct me.

A World Cup winner with Germany as a player in 1990, as a coach Klinsmann led his country to the semifinals of the 2006 tournament on home soil. The Americans’ best performance in the modern World Cup era came in 2002, when they reached the quarterfinals and while Klinsmann has a more dynamic team than Bob Bradley’s side who lost to Ghana in the second round in South Africa four years ago, the draw for Brazil was not kind to them.

We don’t look at ourselves as underdogs. We are not. We are going to take the game to Ghana and they will take it to us and it will be an exciting game and then we go from there. 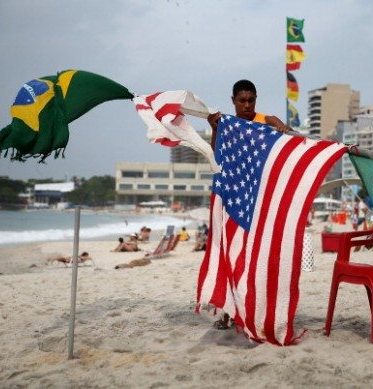