Passengers on board a double-decker Qantas A380 airline have spoken of their horror when a torrent of water poured down cabin aisles. Travellers were settling down for the long-haul flight between Los Angeles and Melbourne when pipes began pouring fresh water into the cabin. Hollywood actress Yvette Nicole Brown said the incident was “the scariest thing I have ever seen” and she feared the torrent would short-circuit the plane’s electrics over the Pacific Ocean.

It looked like a trickle at first and I thought someone had spilt a soda or pop or something and it just got bigger and bigger and it filled up both aisles.

The star of the movie (500) Days of Summer was flying to Australia when the bizarre incident happened an hour into the journey. The captain decided to turn the jet around and flew back to Los Angeles’ LAX airport. Qantas says at no point was passenger safety compromised and the jet turned back for the comfort of those on board.

Crew on board did everything they could to help customers, including moving them to unaffected areas and providing spare blankets so they could stay dry. 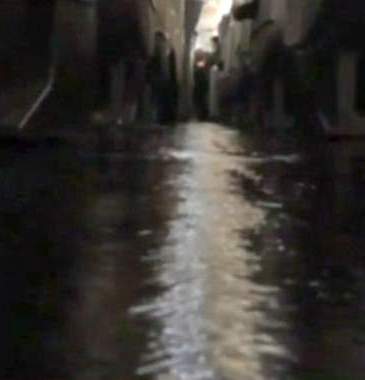