Tony Abbott’s ‘shirtfront’ is Australia’s word of the year

'Shirtfront', an aggressive Australian sports term used by Prime Minister Tony Abbott to challenge Russia's Vladimir Putin, was Wednesday picked as the National Dictionary Centre's word of the year, beating 'man-bun'. Abbott in October vowed to “shirtfront” the Russian president — an Australian Rules football term in which a player charges an opponent — over the crash of Malaysia Airlines MH17 in rebel-held eastern Ukraine. Some 298 people died in the July incident, including 38 Australian citizens and residents, with the West claiming the plane was blown out of the sky with a missile supplied by Russia, an allegation Moscow denies.

I’m going to shirtfront Mr Putin - you bet I am.

While some critics branded his use of the term as inappropriate, Foreign Minister Julie Bishop said last month that “it’s now entered the diplomatic lexicon of many countries.” The leaders of Britain and India joked about the word when they addressed Australia’s parliament immediately after the G20. The phrase just pipped ‘man-bun’ - sometimes shortened to “mun” and used to describe a hairstyle sported by men including Australian ‘Thor’ actor Chris Hemsworth and One Direction’s Harry Styles, where the hair is bundled up at the back of the head. 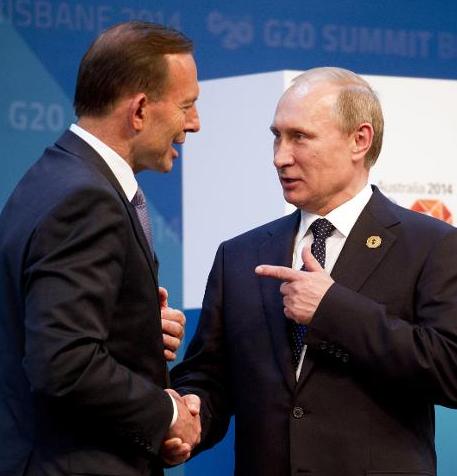