Sky Sports pundit and former footballer Chris Kamara proved he is still quick on his feet after catching a thief in Brazil. Kamara (pictured above with the man behind him in handcuffs) — who is a cult figure for his punditry and commentary on Soccer Saturday every week — posted a series of pictures and messages about the incident on his Twitter account. In the first, the 56-year-old, who is in the country for the World Cup, wrote: “Not lost me pace!!!”

Giving my statement now, ‘well I ran after him and caught him’.

The Former Leeds United star describes him as “my prize catch”. Later, Kamara revealed no charges were brought against the man after a necklace was retrieved by police. “So all is well that ends well,” he tweeted. Kamara said “instinct took over” when the man took the necklace belonging to Mike, his brother-in-law. The pair were on their way to a kids’ coaching session when the thief struck. After a brief chase they managed to restrain the man with the help of passers-by and held him on the ground for a couple of minutes before the police arrived.

Police and British Consulate in Brazil have politely told me off, a lot of these guys are armed! So don’t chase again. 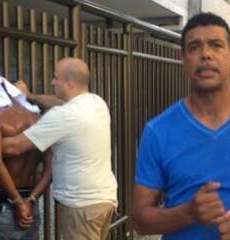