Ukrainian forces struck at pro-Russian separatist bases in eastern regions with air and artillery strikes on Tuesday after President Petro Poroshenko announced he would not renew a ceasefire but go on the offensive to rid Ukraine of “parasites”. Within hours of Mr Poroshenko’s early morning announcement, the military went into action against rebel bases and checkpoints in the east which has been in separatist ferment since April.

We will attack and free our lands. The decision not to continue the ceasefire is our answer to terrorists, militants and marauders.

Mr Poroshenko, who accuses Russia of fanning the conflict and allowing fighters and equipment to cross the border to support the rebels, turned his back on another renewal of a 10-day unilateral ceasefire after four-way telephone talks involving the German and French leaders and Russia’s Vladimir Putin. A statement tweeted by the Ukrainian foreign ministry on Monday night said 27 Ukrainian servicemen had been killed and 69 wounded since the ceasefire began on June 20.

We opened artillery fire, carried out air strikes at the strategic points of the terrorists and places where they are concentrated. 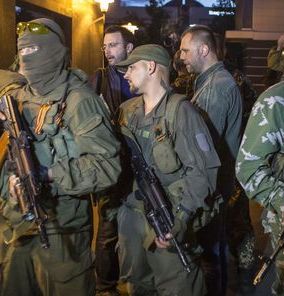