The United Nations has a “moral responsibility” to help impoverished Haiti end a devastating cholera outbreak, Secretary-General Ban Ki-moon says. He spoke to The Miami Herald ahead of a visit to the Caribbean nation due to begin Monday during which he is set to visit families affected by cholera. There had been no cholera in Haiti for at least 150 years until it was allegedly introduced by Nepalese UN peacekeepers sent there in the wake of the devastating January 2010 earthquake.

"Regardless of what the legal implication may be, as the secretary-general of the United Nations and as a person, I feel very sad.

Ban Ki-moon to The Miami Herald

The source of the cholera epidemic was traced to a river that runs next to a UN camp in the central town of Mirebalais, where Nepalese troops had been based. The strain of cholera is the same as one endemic in Nepal. The UN has so far denied any responsibility over the outbreak that has killed more than 8,000 people and infected more than 700,000. 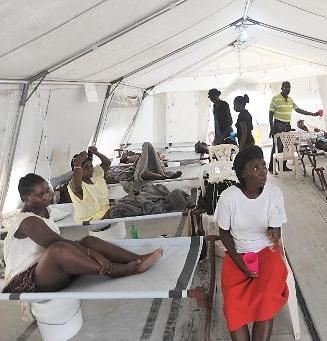