Cameroon is to investigate claims that seven of its players were involved in match-fixing at the World Cup in Brazil. A statement by the Cameroon Football Federation (FECAFOOT) said the probe would be conducted by its Ethics Committee. The investigation comes after a convicted Singaporean match-fixer, Wilson Raj Perumal, accurately predicted the score before Cameroon’s 4-0 defeat by Croatia on June 18, according to German magazine Der Spiegel.

We are strongly committed to employ all means necessary to resolve this disruptive matter with the shortest delay.

The magazine said Perumal also predicted a Cameroon player would be sent off in the first half of the game. Midfielder Alex Song, who also plays for Barcelona, was subsequently dismissed during the opening 45 minutes for elbowing Mario Mandzukic. Cameroon also lost their two other Group A matches—beaten 1-0 by Mexico and 4-1 by Brazil. 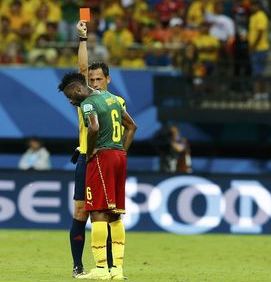