An anti-riot drone equipped with pepper spray, strobe lighting, lasers and deafening audio to disperse unruly crowds has gone on the market. The unmanned Skunk, made by South African firm Desert Wolf, has four high-pressure carbon fibre air guns, each capable of firing 20 paintballs, pepper spray capsules or rubber bullets per second, “stopping any crowd in its tracks,” and can carry up to 4,000 rounds at a time. In a press release, the makers said the highest projectile firing rate will only be used in “an extreme life-threatening situation.”

We received an order for 25 units just after [the unveiling]. We cannot disclose the customer, but I can say it will be used by an international mining house. We are also busy with a number of other customers who want to finalise their orders.

The company said the device had been sold to an international mining company, and could be used to help prevent another Marikana—a reference to a 2012 protest in which 34 striking miners were shot dead in clashes with police. Unveiled at a recent trade show, it retails for 500,000 rand or about US$47,000. It is also capable of identifying and recording individuals in a crowd using FLIR thermal infrared and HD colour cameras, and controllers on the ground can use microphones to remotely broadcast instructions and warnings.

It’s absolutely outrageous. Using pepper spray like ammunition to scatter the crowd. People are entitled to be on strike. Who would make the decision? It’s absurd.

James Nichol, who represents families of miners killed at Marikana 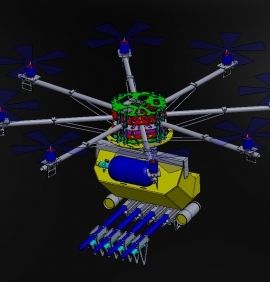