A European spacecraft is closing in on a comet it has been tracking for over 10 years in a mission likened to the action film “Armageddon”. Rosetta has travelled 4 billion miles across the asteroid belt and more than five times the Earth’s distance from the sun as it tracked down 67P/Churyumov-Gerasimenko. The comet is currently travelling around the sun at around 34,175 mph. The craft was launched in March 2004, and is set to complete the next phase of its mission on Wednesday afternoon, when it moves within just 62 miles of the comet at the same speed.

In November it will deploy a small robotic lander, Philae, which will steer itself to the comet’s surface. It will do this by shooting harpoons into the 2.5-mile dirtball before the lander docks on the surface - a move that has never been attempted before. It will send back images and conduct the first in-situ analysis of a comet’s composition. The Philae probe and its orbiter will study the plume of gas and water vapour that will boil off and trail behind as the comet nears the Sun. If the chemical signature of hydrogen matches that found in water on Earth, it will strongly suggest comets filled the oceans when they smashed into the planet billions of years ago. 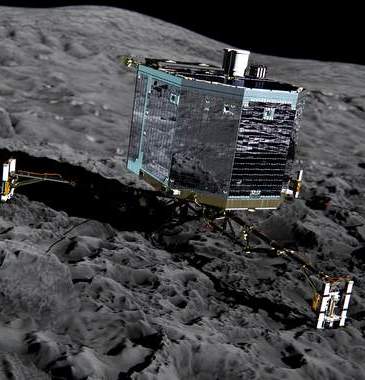