Mohamed Fahmy is now made to wear the navy blue prison uniform that marks those convicted by Egyptian courts. The new clothing is just one change that reinforces last week’s stunning verdict in the Egyptian-Canadian journalist’s case—a turn of events that has left him in a “terrible state of mind,” his family said. Fahmy was working for Qatar-based satellite news broadcaster Al-Jazeera English when he was arrested along with two colleagues—Australian Peter Greste and Egyptian Baher Mohamed—on Dec. 29. The trio were accused of supporting the Islamist Muslim Brotherhood group of ousted president Mohammed Morsi, which Egypt’s current government has declared a terrorist group.

He was absolutely demoralized, very down, quite pessimistic towards how things will progress.

Adel Fahmy, Mohamed’s brother, told The Canadian Press on Wednesday after the family’s first prison visit since the verdict in Cairo

The journalists repeatedly denied all the allegations against them and contended they were just doing their jobs. Yet, after a trial that Fahmy’s family said was marked with mistakes and delays, the journalists were convicted and Fahmy was sentenced to seven years in prison. Fahmy’s family is taking the case to an appeals court, pursuing a presidential pardon and is also hoping international pressure may result in an exceptional overturning of the conviction. But Fahmy isn’t putting much stock into his family’s latest efforts just yet.

He doesn’t want to put too much hope again into anything. He’s just feeling that they’re a very important card for Egypt in their battle or conflict with Qatar. 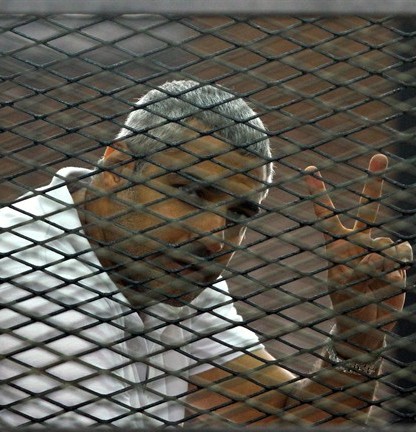