Fabien Cousteau, grandson of famed French oceanographer Jacques Cousteau, emerged from the turquoise waters off the Florida Keys on Wednesday morning, marking the end of a record-breaking, 31-day stay in an underwater habitat with a team of scientists and documentary filmmakers. The younger Cousteau, 46, along with two “aquanauts,” took the 60-foot dive to Aquarius, a 43-foot-long laboratory resting off of Key Largo, on June 1 following years of preparation and delay.

After 31 days under water, [Fabien Cousteau] and his crew are about to become land dwellers again.

While Cousteau’s goal was to attract more support for ocean conservation, teams of scientists from the Massachusetts Institute of Technology and Northeastern University rotated through the laboratory studying the impact of changing seas on underwater life. The ability to live underwater allowed researchers to leave the habitat several times a day, including the middle of the night, to collect samples from nearby coral reefs and observe marine life in otherwise impossible circumstances. 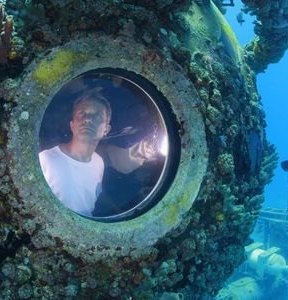