Google is now offering websites a tool that will let them deep-six the traditional CAPTCHA method and replace it with a box that just asks the user to click a box in response to the usual “I am not a robot” prompt. CAPTCHA is the term for the mashed-up letter sequences you must type to ‘prove you’re not a robot’. As Google explained last year, algorithms can now solve 99 percent of the CAPTCHA’s out there, including Google’s own version of them. And while checking the box might seem less secure than typing jumbled letters, the new process is actually powered by a sophisticated AI analysis that takes account of what the user does before during and after the click.

It’s much easier to tap photos of cats or turkeys than to tediously type a line of distorted text on your phone.

A Google statement via the company’s official blog

The new system, which can already be found on a handful of websites including Snapchat is not entirely CAPTCHA-free, however. Google said in instances where its risk analysis is not confident that the user is human, the bad old CAPTCHA might make an appearance. This new wave of post-CAPTCHA innovation came in response to artificial intelligence systems like IBM’s Watson, which are able to crack CAPTCHA’s through brute force while using minimal amounts data and compute power. 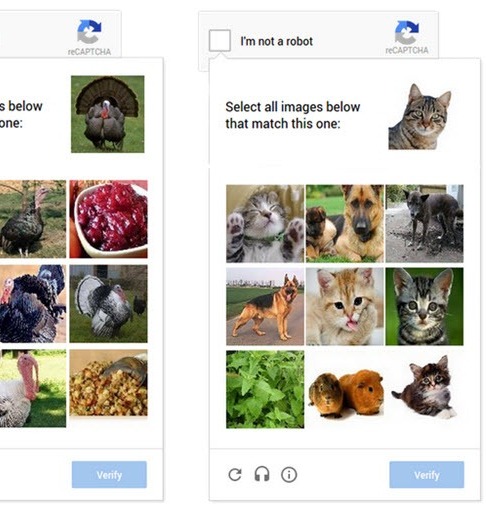