Gunfire was heard and police used tear gas and smoke canisters to disperse protesters as chaos erupted Sunday night in Ferguson, Missouri, which has been racked by protests since an unarmed black teenager was shot by police last week. Hundreds of protesters fled to safety after authorities fired canisters of smoke to disperse them hours ahead of a planned midnight curfew. The Missouri Highway Patrol said some tear gas was used along with the smoke bombs. Gunfire was heard, by a Reuters reporter and photographer, but it was unclear where it was coming from.

The actions took place hours before a midnight curfew imposed for the second night in the tense St Louis suburb, site of ongoing protests as well as violence and looting since Michael Brown, 18, was shot to death on Aug. 9. He was shot at least six times, including twice in the head, a preliminary private autopsy performed on Sunday found. One of the bullets entered the top of Brown’s skull, suggesting his head was bent forward when it struck him and caused a fatal injury. 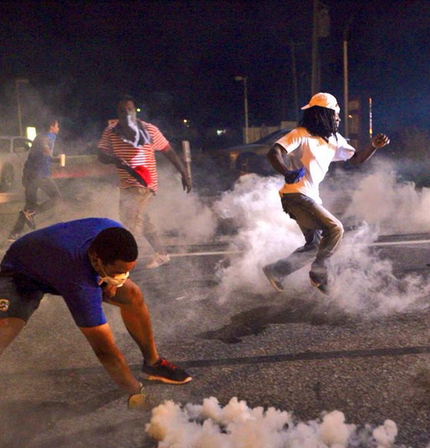