Have scientists solved a cosmic mystery and found first sign of Dark Matter?

Astronomers may finally have detected a signal of dark matter, the mysterious and elusive stuff thought to make up most of the material universe. While poring over data collected by the European Space Agency’s XMM-Newton spacecraft, a team of researchers spotted an odd spike in X-ray emissions coming from two different celestial objects - the Andromeda galaxy and the Perseus galaxy cluster. The signal corresponds to no known particle or atom and thus may have been produced by dark matter, researchers said.

The signal’s distribution within the galaxy corresponds exactly to what we were expecting with dark matter - that is, concentrated and intense in the center of objects and weaker and diffuse on the edges.

Dark matter is so named because it neither absorbs nor emits light and therefore cannot be directly observed. But astronomers know dark matter exists because it interacts gravitationally with the “normal” matter we can see and touch. And there is apparently a lot of dark matter out there. Observations of star motion and galaxy dynamics suggest about 80 percent of all matter in the universe is “dark,” exerting a gravitational force but not interacting with light. If the results - published next week Physical Review Letters - hold up, it could usher in a new era in astronomy, study team members said.

Confirmation of this discovery may lead to construction of new telescopes specially designed for studying the signals from dark matter particles.

Study lead author Alexey Boyarsky, of EPFL and Leiden University in the Netherlands 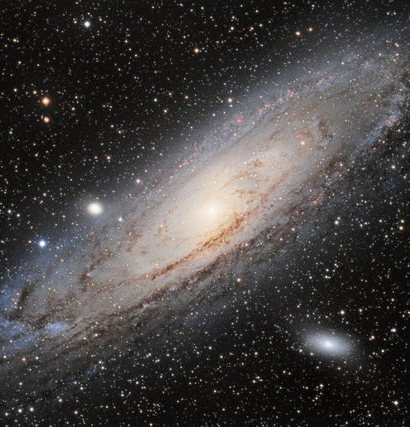