Hope in sight: Star Trek-style smart glasses for the blind ‘in shops by 2016’

Pairs of high-tech smart glasses, designed to help millions of blind and partially sighted people to see, could be in shops in 2016. The specs use a specially adapted 3D camera to maximise a person’s remaining vision by separating and highlighting objects ahead. They were created by researchers at the University of Oxford, who linked up with the Royal National Institute of Blind People (RNIB) to develop them further. RNIB Solutions managing director Neil Heslop said trialists had experienced extraordinary things while testing the glasses.

The RNIB believes the new smart glasses could help as many as 15 million people worldwide. At the moment, the glasses are rather bulky. They are also fairly expensive and participants have to carry around a connected laptop with them. But the project recently won $843,000 from the Google Impact Challenge - a competition to develop tech to transform lives - which means the team can now modify the headset further. Wider trials are soon to get under way and the team hopes to have a smaller version of glasses in shops as early as 2016 with a target price of around $500.

To have something that will help me to keep independent, able to walk to work, to make tea - I think it will make a big difference to my quality of life. 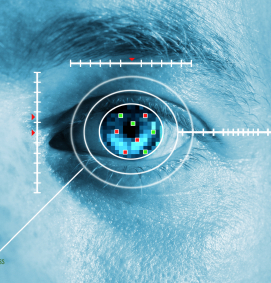