A humanoid robot with a head, hands and feet and wearing stylish red sneakers boarded a flight for Germany at Los Angeles International Airport on Monday, becoming what was billed as the first robot traveling as a paid passenger on an airline. The robot, named Athena, created a scene at the Tom Bradley International Terminal as she was pushed in a wheelchair up to the Lufthansa counter to pick up her ticket to Frankfurt. Built by the Salt Lake City engineering and robotics company Sarcos, Athena was purchased by Germany’s Max Planck Society, which is trying to make her perform tasks too dangerous for humans, like cleanup after the Fukushima nuclear disaster.

We don’t want humans to go there and sacrifice their lives. I would like to have a robot achieve the same task, such as opening up doors and cleaning up.

Athena got an economy ticket but enjoyed special treatment - she skipped the regular metal detector and instead got a special pat down treatment. And she skipped the queues at boarding and was pushed in a wheelchair on to the plane - that’s because the software to move her legs are still in the works. Athena could have been shipped in a big box like any other electronic gear, but the scientists wanted to see how humans responded to a robot sitting in a plane. Plus, Herzog said, “It’s cheaper to get a seat.” 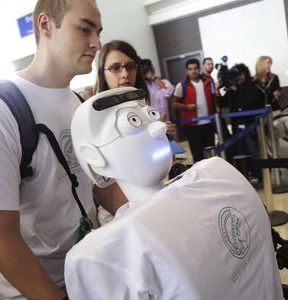