A family battled a 460-kilo alligator for more than five hours, putting several large hooks into the beast before firing a fatal shotgun blast into the gator’s head. The result? The catch of a lifetime and a state record in Alabama. The 4.5-metre gator was hooked in a creek west of Montgomery early Saturday. The first attempt to weigh the gator destroyed a winch state biologists typically use, so they had a backhoe lift it. It weighed about 460 kilos. It was caught by Mandy and John Stokes, brother-in-law Kevin Jenkins and his children, 16-year-old Savannah and 14-year-old Parker. The gator didn’t go down without a fight. After the family got some large hooks into the gator, Mandy Stokes aimed her 20-gauge shotgun at the “sweet spot” behind the alligator’s eyes. That’s where she was told to aim during a mandatory training class for Alabama gator hunters.

We give all the glory to God. Ten men couldn’t have done what we did. 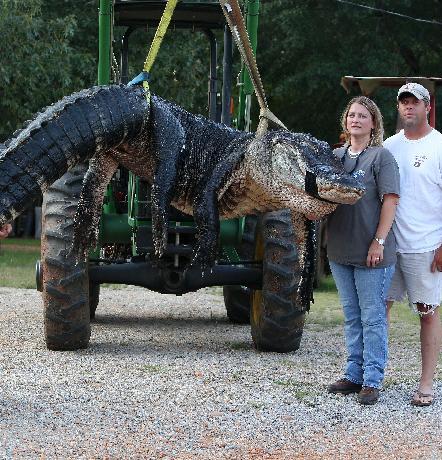