Hurricane Arthur began moving offshore and away from North Carolina’s Outer Banks early Friday after slashing into the state’s barrier islands overnight. Arthur strengthened to a Category 2 storm with winds of 160km/h (100mph) Thursday evening before passing over the southern end of the Outer Banks — a 320km (200-mile) string of narrow barrier islands with about 57,000 permanent residents. The islands are susceptible to high winds, rough seas and road-clogging sands, prompting an exodus that began Wednesday night. The storm was moving northeast Friday morning after turning slightly west late Thursday, which increased the threat to mainland communities from flooding, tornadoes and intense winds.

We’re most concerned about flooding inland and also storm surges in our sounds and our rivers further inland.

More than 22,000 were without power across the Carolinas early Friday, according to Duke Energy’s website. After passing over North Carolina early Friday, Hurricane Arthur was expected to weaken as it traveled northward and dump rain along the East Coast. The annual Boston Pops Fourth of July concert and fireworks show were held Thursday night just before of a heavy downpour from Arthur, while fireworks displays in New Jersey and Maine were postponed until later in the weekend. 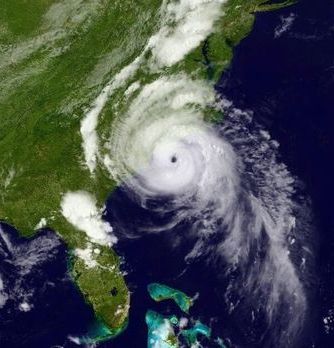