The son of tennis star John McEnroe and actress Tatum O’Neal has been charged with drug possession. Kevin McEnroe and another man were arrested on Tuesday night during “a narcotics transaction” in New York’s East Village, police said. McEnroe did not enter a plea during his court appearance on Wednesday and was released without bail. Officers said the 27-year-old was in possession of cocaine and prescription medication when he was arrested.

Given the amount of drugs on him … we believe we have a strong intent to sell case.

He was charged with criminal possession of a controlled substance. McEnroe’s lawyer told The Wall Street Journal that there was “nothing remarkable” about the amount of drugs found on her client. She declined to comment further. The other man arrested, Niro Meneses, 22, was held on suspicion of criminal possession of a controlled substance with intent to sell. Former world No. 1 tennis player John McEnroe divorced from O’Neal in 1994. 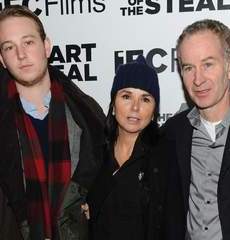