A “knife-wielding” suspect has been shot dead by police in north St Louis, some four miles from Ferguson, where an unarmed black teenager was killed by an officer, setting off days of unrest. The suspect, identified as a 23-year-old African-American male, was approached by officers following reports of a convenient shop robbery and a “man with a knife acting erratically”, police said.

As officers arrived, the suspect turned towards the officers and started to walk towards them clutching his waistband. He then pulled out a knife … and told the officers: ‘Shoot me now. Kill me now.’

The suspect ignored verbal commands to drop the knife and continued to approach the officers, coming “within three to four feet” before two policemen opened fire, Chief Dotson said. The suspect was pronounced dead at the scene. The officers, who were not identified, have been placed on administrative duty pending an investigation. It follows several days of unrest in the wake of the police shooting of 18-year-old Michael Brown. Scores of local residents descended on the scene, about four miles south east of Canfield Drive, where Mr Brown was shot at least six times by Ferguson police officer Darren Wilson on August 9. 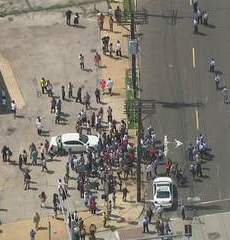