An incredible, reprocessed picture of Jupiter’s moon Europa shows the mysterious natural satellite’s amazing colors as they have never been seen before. The original photos of Europa were collected by the Galileo spacecraft, which explored Jupiter and its moons from orbit in the 1990s. NASA officials reprocessed Galileo’s data using modern imaging techniques that improved on an enhanced-color view of Europa the agency created in 2001. NASA released the picture as the agency pushes forward with plans to explore Europa in the coming decades, based on the theory that there is water lurking underneath the moon’s icy shell. That water could host life, under the right conditions, scientists have said.

The story of life on Earth may have begun in our oceans, and that’s because – of course – if we’ve learned anything about life on Earth, it’s that where you find the liquid water, you generally find life.

Kevin Hand, an astrobiologist at the NASA Jet Propulsion Laboratory

Kevin Hand, an astrobiologist at the NASA Jet Propulsion Laboratory, said Europa is a “game-changer” for life-seeking missions because the moon’s main source of energy is from Jupiter – not the Sun. As the moon orbits the massive gas giant, the immense gravity from Jupiter causes Europa to flex. That flexing not only creates energy, but can grind the water of the moon against rocks. These interactions could potentially create the energy necessary for life, providing that the building blocks – such as amino acids – are available, scientists have said. Among NASA’s proposed missions to Jupiter’s icy moon is the Europa Clipper, a mission pegged to cost about $2 billion. It would orbit Jupiter and get more information about Europa’s ocean in a series of flybys. 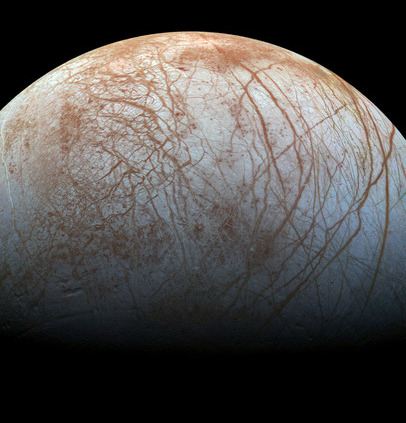