Palaeontologists say they have discovered a new dinosaur with wing-like horns on its skull. Mercuriceratops, a relative of the Triceratops, is described in the scientific journal Naturwissenschaften as weighing about two tons, having a beak-like mouth and bizarre, butterfly-like protrusions on either side of its head. The Daily Mail called them “angel wings.” Researchers announced the new dinosaur after discovering the frilled fossils in two locations: one in Montana, the other in Alberta, Canada.

We would never have predicted this from our experience with working on horned dinosaurs. It’s modifying an element of the skull that’s never been modified before.

"When a single fossil is discovered, it’s often difficult to tell whether it’s a new species or just a standard variation, or weird mutation, of a known animal," Amina Khan explains in the Los Angeles Times. Named after Mercury, "the Roman messenger god who sported wings on either side of his helmet," the plant-eating Mercuriceratops roamed the Earth about 77 million years ago.

[The] fact that these two fossils with the same butterfly-like protrusions were found hundreds of miles apart showed that they must be members of an undiscovered species. 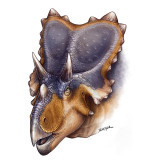