A street performer dressed as Spider-Man in New York City’s Times Square was arrested after punching a police officer who scolded him for demanding more money from a couple he had posed with for a picture. The latest incident prompted business and New York City leaders to call for licenses and background checks for costumed performers at Times Square. On Saturday, Junior Bishop, 25, was overheard by a police officer refusing a $1 bill from a woman with whom he’d taken a picture, insisting instead on a larger amount. After the police officer told Bishop he could only accept tips but not demand money, the Brooklyn resident began yelling at him. When the officer told him he was under arrest, Bishop punched him in the face.

Our feeling is that there are honest folks who are out just trying to earn a living. But there’s also some folks who are taking advantage of people.

The incident was not the first involving a costumed street performer running afoul of the law in New York. Last month, a different Spider-Man was fined $370 for punching a tourist who had pelted him with snow. Last year, a costumed Cookie Monster was arrested on suspicion of shoving a 2-year-old child whose mother failed to tip him, and in 2012 a man dressed as Elmo was arrested after going on an anti-Semitic tirade. 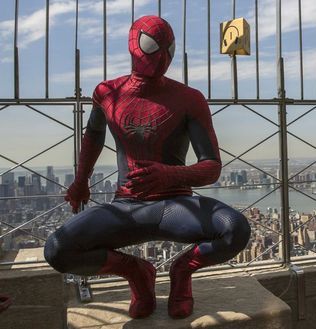