Louis Zamperini, a war hero, Olympian and the subject of a celebrated book and upcoming movie on his harrowing story of survival against all odds, died after a long battle with pneumonia, his family said Thursday. Zamperini outlived almost all of those who watched him weave his way through his remarkable life, but the outpouring from those who came to know and love the man in his later years was as immediate and intense as the life he lived. Lauren Hillenbrand, the author of the best-selling book ”Unbroken: A World War II Story of Survival, Resilience, and Redemption,” said over countless hours of interviews Zamperini became a surrogate grandfather and beloved friend.

Louie greeted every challenge of his long journey with singular resilience, determination and ingenuity, with a ferocious will to survive and prevail, and with hope that knew no master.

A track star at the University of Southern California, Zamperini competed in the 5,000-meter run at the 1936 Berlin Olympics. He finished eighth but caught attention by running the final lap in 56 seconds—and grabbed headlines by stealing a Nazi flag. He was a bombardier on a U.S. Army Air Forces bomber that crashed in the Pacific Ocean during a reconnaissance mission. He and one of the other surviving crew members drifted for 47 days on a raft in shark-infested waters, drinking rain water and eating fish and birds they caught with their bare hands, before being captured by Japanese forces. 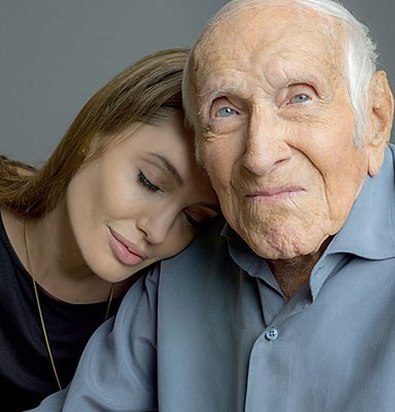