A restaurant in China is electrifying customers by using more than a dozen robots to cook and deliver food. Mechanical staff greet customers, deliver dishes to tables and even stir-fry meat and vegetables at the eatery in Kunshan, which opened last week. “My daughter asked me to invent a robot because she doesn’t like doing housework,” the restaurant’s founder Song Yugang said. Two robots are stationed by the door to cheerfully greet customers, while four short but humanoid machines carry trays of food to the tables.

The robots can understand 40 everyday sentences. They can’t get sick or ask for vacation. After charging up for two hours they can work for five hours.

In the kitchen, two large blue robots with glowing red eyes specialise in frying, while another is dedicated to making dumplings. The restaurant, in the eastern province of Jiangsu, follows in the tracks of another robotic eatery that opened in the northeastern city of Harbin in 2012. Rising labour costs in China have encouraged manufacturers to turn to automation, and the country last year surpassed Japan to become the world’s biggest consumer of industrial robots.

My children are really excited by the robots. 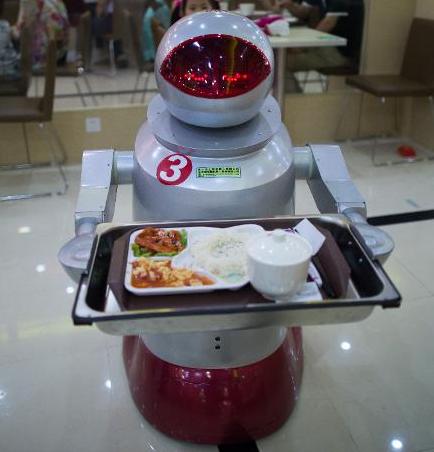